The management of Galveston County’s political offices became a bit more of a family affair Thursday.

Seventeen public officials took oaths of office that morning during a ceremony at the county courthouse.

The swearing-in, a regular event held on New Year’s Day following an election year, typically features newly elected public officials taking the oath of office with the help of a family member. This year was no different, but did feature a couple families that already had the drill down pat.

“It seems to be a new trend,” said Patricia Grady, citing a handful of other husband-and-wife judges that serve elsewhere in Texas. “It just seems like a transition where more woman are coming forward.”

Both Gradys were elected after running unopposed in November’s general election.

For the Cox family, the transition might take a little getting used to, Alison Cox said.

“It’s a new beginning for me; it’s a brand-new career,” Cox, who had a career as a teacher before being elected, said.

“My husband’s life is public service and I’m excited to be in that same field,” she said.

Lonnie Cox said that when he met wife sharing tips about where to get robes was not something they imagined.

“This is not something that we dreamed of,” Cox said. “I wanted to be a trombone player. She wanted to play the French horn.”

Thursday’s ceremony was a lighthearted affair. District Clerk John Kinard, who normally swears in juries in the room where the ceremony was held, joked that the crowd was the happiest he’d ever seen.

Sections of the crowd whooped and shed some tears as their friend or family member took the oath.

There was room for sentimentality, too.

District Court Judge Anne Daring was sworn in by her father, Walt Daring, who traveled with family and a 55-year-old bible from Mobile, Ala., to take part in the ceremony. Judge Darring shouted out to her roots with a “Roll Tide” after being sworn in.

Other officials reflected on their long careers in public service as they made their remarks. Justice of the Peace Penny Pope noted that her daughter was just 3 years old when she took her first public job, 35 years ago. 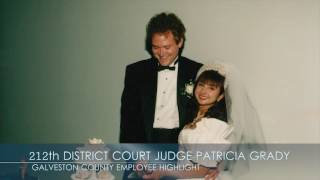 Patricia Grady Endorsed by the Hispanic Republicans of Texas